by Amelia D. Hay | A Writer Writes, Behind the Scenes

I’m super excited to announce that I’m writing a conspiracy thriller novella. I love reading. It’s through reading books that I’ve developed interests that have filtered through into the writing of my fiction novels. At the end of 2016, I decided to make a commitment to start reading more books within my genre.

In previous years, I adopted the philosophy of reading anything that peaks my interest, and to a certain extent, I still do. But, as I finished reading The Brass Hall by Kevin Tumlinson I became interested in the archaeological elements in this book. This new found interest lead me to search Amazon for the next book in the series, The Coelho Medallion. After finishing reading the second book, I started to develop an idea of writing a conspiracy thriller novel trilogy around a female archaeologist which I’ve later named Elizabeth James.

This new idea inspired me to merge my two story worlds into a novella in a similar way that J F Penn has done with her Day of the Vikings novel. In this novel, she introduced a character, Daniel Blake into the world of ARKANE. The character Daniel Blake has his own trilogy, the London Psychic Crime Thrillers, which I love.

After careful consideration of my current fiction writing workload, I decided to take a similar approach to test the reading market to see if I could find readers who are interested in my Elizabeth James conspiracy thrillers. At the moment, I’m advertising the James Lalonde Thriller series as a nine book series. I chose this option to give readers an understanding that the series is more than just three books. But realistically, I plan to write these books for three years, to start off and then for as long as there is a demand.

I’m currently outlining the story, and I’m including an extra step in the outlining process from the lessons learned through writing Silence and Immunity. I realised that I needed to spend more time getting the story right in the outlining phase. Once I finish my first draft, I tend to leave plot holes and forget about minor characters. So, to avoid this mistake with future books I’ve decided to revise or edit my outline before I start writing. The conspiracy thriller novella, Missing is 20,000 words in length or 80 physical book pages. This book will be free for the readers of my websites and available on Amazon for £1.99 or $2.99 (USD).

Want to read it for Free?

I am to finish the first draft and revisions of Missing: A James Lalonde Conspiracy Thriller Novella by the end of June. If you’re interested in becoming a beta reader and being one of the first to read the novella in exchange for feedback on your reading experience, then send me an email using the contact form on my contact page. When you fill out the form select the ‘I want to join your beta reading team’ option from the ‘what is your message about?’ list.

Since, I first wrote this post I’ve shared the first chapter of Missing on my blog, click the button below to read for free. You can also become a James Lalonde Insider to receive and advanced reader copy, so sign up below for updates to be notified.

Become a James Lalonde Insider and Sign up for Launch Updates! 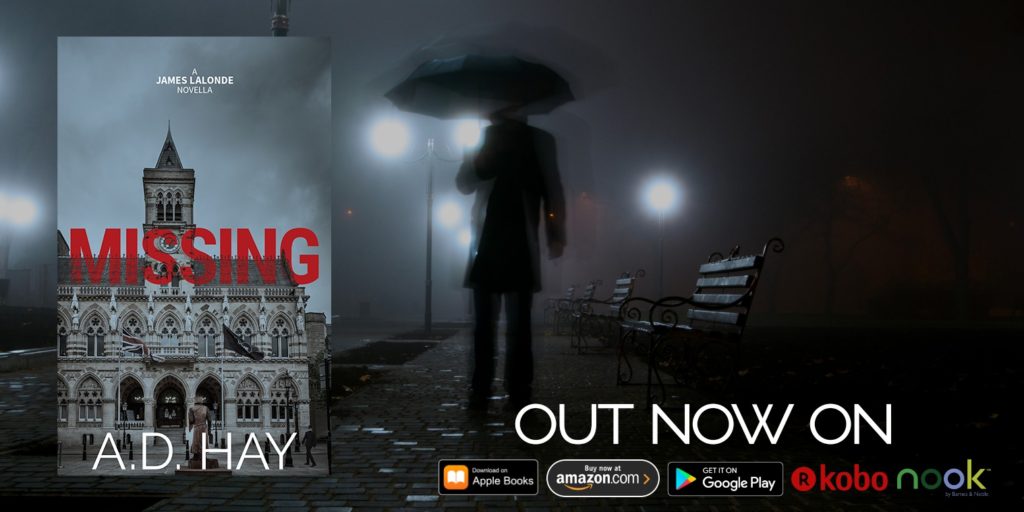 Follow me on
Amelia D. Hay
I'm Amelia. I write mystery and thriller novels under the pen name A. D. Hay and I'm the author of the Missing the first book in the James Lalonde series. I'm the host of the Thriller Novel Nerd Podcast and The Authorpreneur Podcast. Right now, I'm editing my soon to be published mystery novels, Duplicity, 24 Hours, and Immunity. When I'm not writing, hosting my podcasts or coaching aspiring authors, I love to travel around Europe with my Husband Roland, drink tea, and eat pizza.

Follow me on
Latest posts by Amelia D. Hay (see all)

I’m Amelia. I write under the pen name A. D. Hay and I’m the author of Missing, the first book in James Lalonde Thriller series. I’m the host of the Thriller Novel Nerd Podcast. Right now, I’m editing my soon to be published thriller novel which is tentatively titled, Book Two. When I’m not writing or hosting my podcast, I love to travel around Europe with my husband Roland, drink tea, and eat pizza.

Love A. D. Hay’s fiction and the Thriller Novel Nerd Podcast? Wish you could buy A. D. Hay, a cup of coffee? Now, thanks to Buy Me a Coffee and PayPal you can!

I’m a Proud Member of ALLi !

Right now, I’m preparing Book Two in the James Lalonde series (title coming soon), for a final round of revisions. The next step is to send the story off to my editor. I aim to have the ebook available in Kindle Unlimited by the end of December 2020. And, I will be making this novel available for free to my James Lalonde Insiders reader club. You can become an insider here.

I’ve decided to add an extra book between the second book and the start of the byline series, where James arrives in New York. Book Three will be set in a 24 hour period in London. This novel will be available in ebook in Kindle Unlimited by the end of April 2021. And, the paperback editions soon after. I will be making this novel available for free to my James Lalonde Insiders reader club. You can become an insider here.

Book Four in the James Lalonde series needs one final round of revisions before I can hand it off to my editor. This longer novel will be available in ebook in Kindle Unlimited by the end of September 2021. And, the paperback editions soon after. I will be making this novel available for free to my James Lalonde Insiders reader club. You can become an insider here.