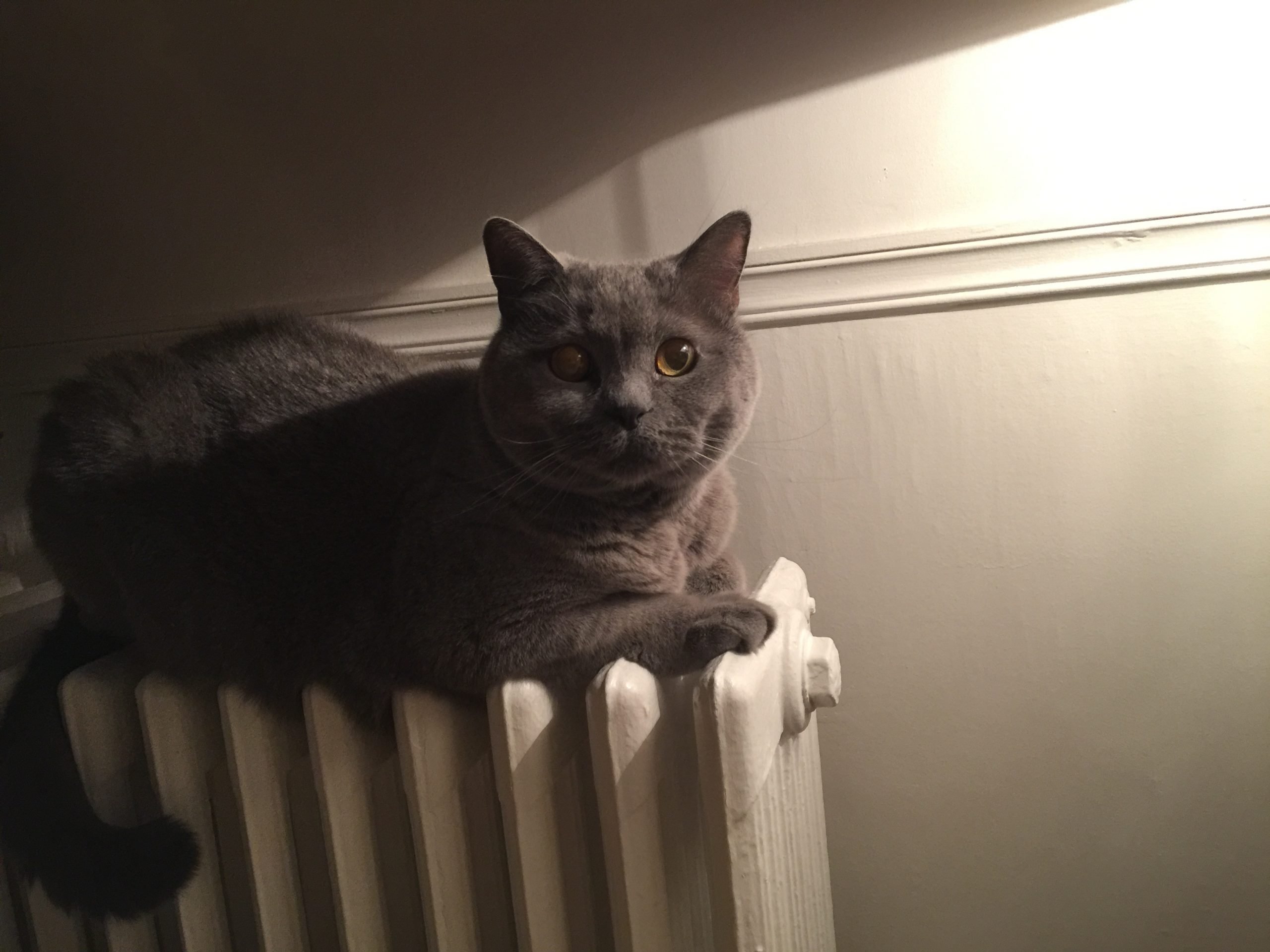 Say hello to Galileo. He’s a family cat who lives in the city of Versailles in France. And, he’s the inspiration behind, Alfred’s cat Tiberius.

I’m tearing myself away from writing my cozy mystery short story, Entitled to Murder to share chapter eight, straight off the presses. Well technically, there are no presses. But, you get it, I’ve just finished revising and editing the chapter, and I’m a little over-excited. In other news, I made a minor addition to the ebook’s cover art because I’ve decided to make Tiberius, the grey English Shorthair cat a regular character in the series. The character is inspired by a family cat owned by my husband’s cousin. He’s super sweet, and quite miraculously, I did not break out with my usual allergy when I pet him.

If this is the first time you’ve stumbled across Entitled to Murder, I highly recommended going back and reading from chapter one. Click here to start at the beginning of the story. 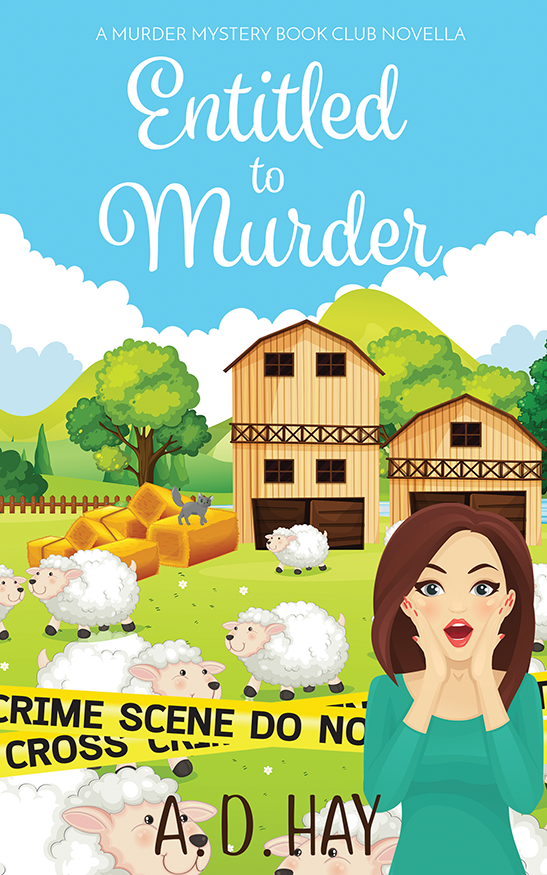 A recently widowed bookworm must solve the mysterious circumstances behind her grandfathers’ death, but there’s one thing she is certain of… the killer is a member of her family.

Lucy Hobbs has lived a sheltered life. The only danger she has ever faced was turning the pages of a murder mystery novel. All of that is about to change. It’s Halloween, Lucy’s favourite time of year, but it’s more than just a holiday—it’s her grandfather, Alfred’s 87th birthday. After months of grieving this is the one thing, she has been looking forward too. Little does Lucy know she is walking into a family feud, a lost sheep, and murder. On the day of Alfred’s Will reading, Lucy learns of some unexpected changes that cause her to look at the birthday party’s events under a new light.

All rights reserved, including the right to reproduce this book or portions thereof in any form whatsoever. For information, address the publisher at: hello at ameliadhay dot com. 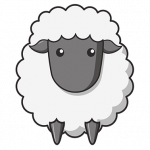 Flames of the small fire in the black cast-iron chimney crackled in the background, providing much-needed warmth to the chilly interior of Meadow House. The inarticulate babble of the crowd assembled in the drawing-room drowned out the sound of the downpour hitting the conservatory’s glass walls.

Time seemed to slow down as Lucy looked out the window at the large green trees that lined the property. A slight chill ran through Lucy’s body as she pushed the memories of her grandfather’s memorial service to the back of her mind. Lucy sighed as her lip quivered. She needed a distraction. Two hours had passed since her family had returned from the cemetery, but it felt more like half a day. Anxiety and paranoia had filled her idle mind with a sea of thoughts. All Lucy wanted to do was hide in her portion of the house. But she needed to be here. After all, it was the right thing to do.

Glancing over her shoulder, Lucy spotted her grandmother Henriette sitting on the couch surrounded by her parents, Jane and George and her uncle, Thomas. Henriette clutched a white handkerchief as she stared straight ahead. Thomas rubbed Henriette’s back as he peered down at her with a concerned expression. Lucy’s heart sank as she observed her grandmother’s grief. Pushing all thoughts of Christopher aside, Lucy scanned the room in search of a distraction.

Next to the fireplace, Rose stood folding her arms, engrossed in a heated discussion with Grace, oblivious to everything going on around her. Grace stared at Rose with an expression that could freeze hell over. With an uneasy feeling building up within her, Lucy gazed out of the window as Rose glanced in her direction. Careful not to get caught, Lucy peered over as Grace grabbed Rose’s bicep, drawing her closer. She whispered in Rose’s ear.

What are they arguing about now?

Lucy took a deep breath as tears welled up in her eyes. Tilting her head in a side-to-side rhythm, Lucy peered over at her squabbling aunts. Could their argument not have waited until after the wake?

Concerned others had noticed the tension, Lucy scanned the room. To her surprise, her family were gathered around the drawing-room in their usual clicks, preoccupied with their conversations. But for how long. No one had noticed the escalating argument between Rose and Grace. Lucy’s stomach churned as Grace’s face flushed a shade of red. Releasing her hold of Rose’s bicep, Grace pointed towards the hallway.

I should step in.

A wave of nausea swept over Lucy’s body as she considered interfering. The last thing Lucy needed was for everyone to stare at her. Frightened of causing a scene, she dismissed all notions of breaking up the fight. Lucy sighed as she turned and stared at the lush green gardens.

Out of the window, Lucy noticed the wind bending the tall green trees. She smiled to herself as a familiar, thick tail brushed up against her leg. A melodic cry called out. Crouching down, she scratched Tiberius under his chin. Moments later, a grey blur dashed up the three small steps and down the hallway, disappearing out of sight. Lucy bit her lip, trying to hold back the tears. Poor Tiberius, he must miss grandfather.

I hope you enjoyed reading the eighth chapter of my cozy mystery short story, Entitled to Murder. Now, I need to get back to writing. Hopefully, I will finish writing the next scene by the end of the day. As I write and edit the subsequent scenes and chapters, I’ll share them on this blog and over on Wattpad, so be sure to follow me if that’s how you prefer to read.

I’m looking forward to sharing the next few chapters with you as I finish writing and editing.