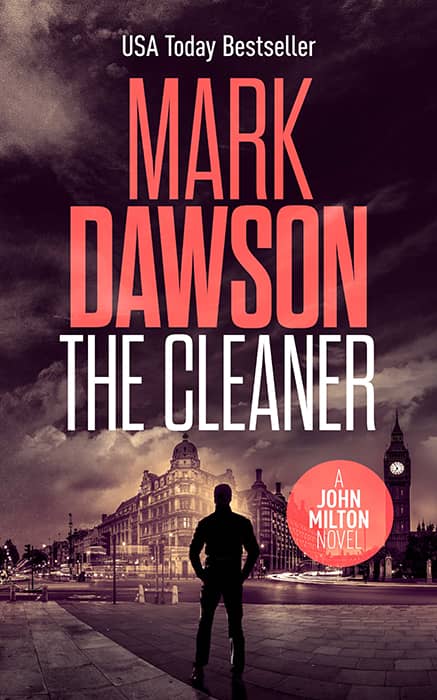 This is another one of those classic cases where I’ve read a book and thought, I must review this book for my Thriller Novel Nerd Blog. I’m in the process of creating a better system for this. Alas, several months later, I’m now getting around to writing the review for The Cleaner by Mark Dawson. The reason I wanted to write this review was twofold. First, I loved it. The book was unexpected deep, sad, and emotional. Second, the book was written by a successful self-published author. It’s my intention to review both sides of the publishing world, traditional and self-published or indie authors. Well, the best of both worlds.

The synopsis below was sourced off the google play books store by the book review plugin that I use on my website.

Meet John Milton. He considers himself an artisan. A craftsman. His trade is murder. Milton is the man the government sends after you when everything else has failed. Ruthless. Brilliant. Anonymous. Lethal.

You wouldn’t pick him out of a crowd but you wouldn’t want to be on his list. But now, after ten years, he’s had enough – there’s blood on his hands and he wants out. Trouble is, this job is not one you can just walk away from. He goes on the run, seeking atonement for his sins by helping the people he meets along the way. But his past cannot be easily forgotten and before long it is Milton who is hunted, and not the hunter. The Cleaner A career of state-sanctioned murder has taken its toll. Milton is troubled by nightmares, a long line of ghosts who torment his dreams. He resolves to make his next job his last and, then, perhaps, he can start to make amends for everything that he has done.

Sharon Warriner is a single mother in the East End of London, suicidal with fear that she’s lost her young son to a life in the gangs. After Milton saves her life, he promises to help. But the gang, and the charismatic rapper who leads it, is not about to cooperate with him. As London burns through summer riots, Milton finds himself in unfamiliar territory, dealing with an unfamiliar foe. And when his employer sends another agent after him, the odds against him are stacked even higher.

I read this book in four days. From the 10 July to 14 July to be exact. I started read a few days before my wedding in Brisbane. Even in amongst the busy pre-wedding period I read the book. I guess those super short chapters helped me become engrossed in the story at the start.

The Cleaner was not your standard James Bond style espionage thriller. I find these books quite cliche. If love that style of thriller novel, I’m sorry but, this is just my humble opinion. The book was emotional at points. Something, I never expected to experience in a thriller. I found myself invested in the characters. All the characters, including the minor characters where complex and emotional. Every single character had a motive, a believable and understandable motive.

My favourite part of the book

As I write this, it seems a little strange that these moments where my favourite parts of the book. The plot follows the struggles of a single mother and her teenage son. Dawson portray’s poverty in London’s East End without getting all too cliche. The teenager was struggling with living in a bad neighbourhood. An absent father, his struggling mother, a missing older brother and the lure of a gang all drive him to make a few not so great choices. These not so great choices drive his mother across John Milton’s path. What I loved most about this plot line was how it delivered the back stories of the secondary characters. The delivered these back stories in a way that gave the book both depth and avoided overwhelm.

My second favourite part of The Cleaner was the ending. It was true to the realities of life. The ending was bittersweet. There were moments in the ending I would have preferred not to have happened, but maybe I’m just getting sentimental in my old age.

As you can most likely tell, I’m a huge fan of audiobooks. I find that it’s one of the easiest and most convenient ways for me to read books. I’ve listened to so many audiobooks this year and I’m glad to say this audiobook was well read by David Thorpe. The narrator sounded like he enjoyed reading the book. This isn’t always the case with audiobooks. There was little difference between the audio and the kindle version. I followed along in the Kindle ebook as the narrator read the book. Because I didn’t purchase the ebook on Amazon, I didn’t get the kindle whisper-sync for voice feature. So, I didn’t have the grey bar following along. It was still a great reading experience.

I cannot talk about what I didn’t like about this book because I aim to keep these books spoiler free. Considering this, be warned. Look away now if you don’t want even the tiniest hint of spoilers. Let’s say I grew very attached to certain characters in the book that ended up meeting unfortunate endings. I guess this is true to life. Not every one gets their happy ending. But, there’s a part of me that wanted certain people to grow, catch a lucky break, or survive.

If you love an action-packed espionage thriller, then I recommend this book. The Cleaner by Mark Dawson is the first book in the John Milton Series. There is a prequel novella titled 1000 Yards available but you need not read that book first. You can download a copy of The Cleaner on Amazon, iBooks, and other online retailers.

← Starting a Podcast and Writing A New Series | BTS Vlog #2 A Writer Travels: The USA and Europe in One Month →

Follow me on
Amelia D. Hay
I'm Amelia. I write mystery and thriller novels under the pen name A. D. Hay and I'm the author of the Missing the first book in the James Lalonde series. I'm the host of the Thriller Novel Nerd Podcast and The Authorpreneur Podcast. Right now, I'm editing my soon to be published mystery novels, Duplicity, 24 Hours, and Immunity. When I'm not writing, hosting my podcasts or coaching aspiring authors, I love to travel around Europe with my Husband Roland, drink tea, and eat pizza.

Follow me on
Latest posts by Amelia D. Hay (see all)

Love A. D. Hay’s fiction and the Thriller Novel Nerd Podcast? Wish you could buy A. D. Hay, a cup of coffee? Now, thanks to Buy Me a Coffee and PayPal you can!

Right now, I’m preparing Book Two in the James Lalonde series (title coming soon), for a final round of revisions. The next step is to send the story off to my editor. I aim to have the ebook available in Kindle Unlimited by the end of December 2020. And, I will be making this novel available for free to my James Lalonde Insiders reader club. You can become an insider here.

I’ve decided to add an extra book between the second book and the start of the byline series, where James arrives in New York. Book Three will be set in a 24 hour period in London. This novel will be available in ebook in Kindle Unlimited by the end of April 2021. And, the paperback editions soon after. I will be making this novel available for free to my James Lalonde Insiders reader club. You can become an insider here.

Book Four in the James Lalonde series needs one final round of revisions before I can hand it off to my editor. This longer novel will be available in ebook in Kindle Unlimited by the end of September 2021. And, the paperback editions soon after. I will be making this novel available for free to my James Lalonde Insiders reader club. You can become an insider here.

I’m a Proud Member of ALLi !