As I look back on my GoodReads account, it has been almost two months since I finished reading The Coelho Medallion and, I can still remember the story of this debut thriller novel by Sci-Fi Author Kevin Tumlinson. I have to admit sometimes it is a bit of a struggle to remember a story eight weeks later.

In this case, it’s a great story.

The Coelho Medallion by Kevin Tumlinson is an action-packed thriller that merges the worlds of archaeology, the FBI, mythology, and history. Kevin achieves this without using the typical Indiana Jones and FBI stereotypes that can become a little too cliche. The story does not end with a cliffhanger and makes little reference to the short story (The Brass Hall) written before which serves as an introduction to Kevin Tumlinson’s protagonist, Dan Kotler. So, this series doesn’t need to be read in order like The Sanctus Trilogy by Simon Toyne.

I did find the story lagged a bit in the middle of the second act of the story but, it wasn’t enough to drive me away from the book. What kept me going through to the end of the book was the action, the layers of archaeology, terrorism, and wanting to know whether Dan Kotler could save his colleague and stop the terrorists in time. 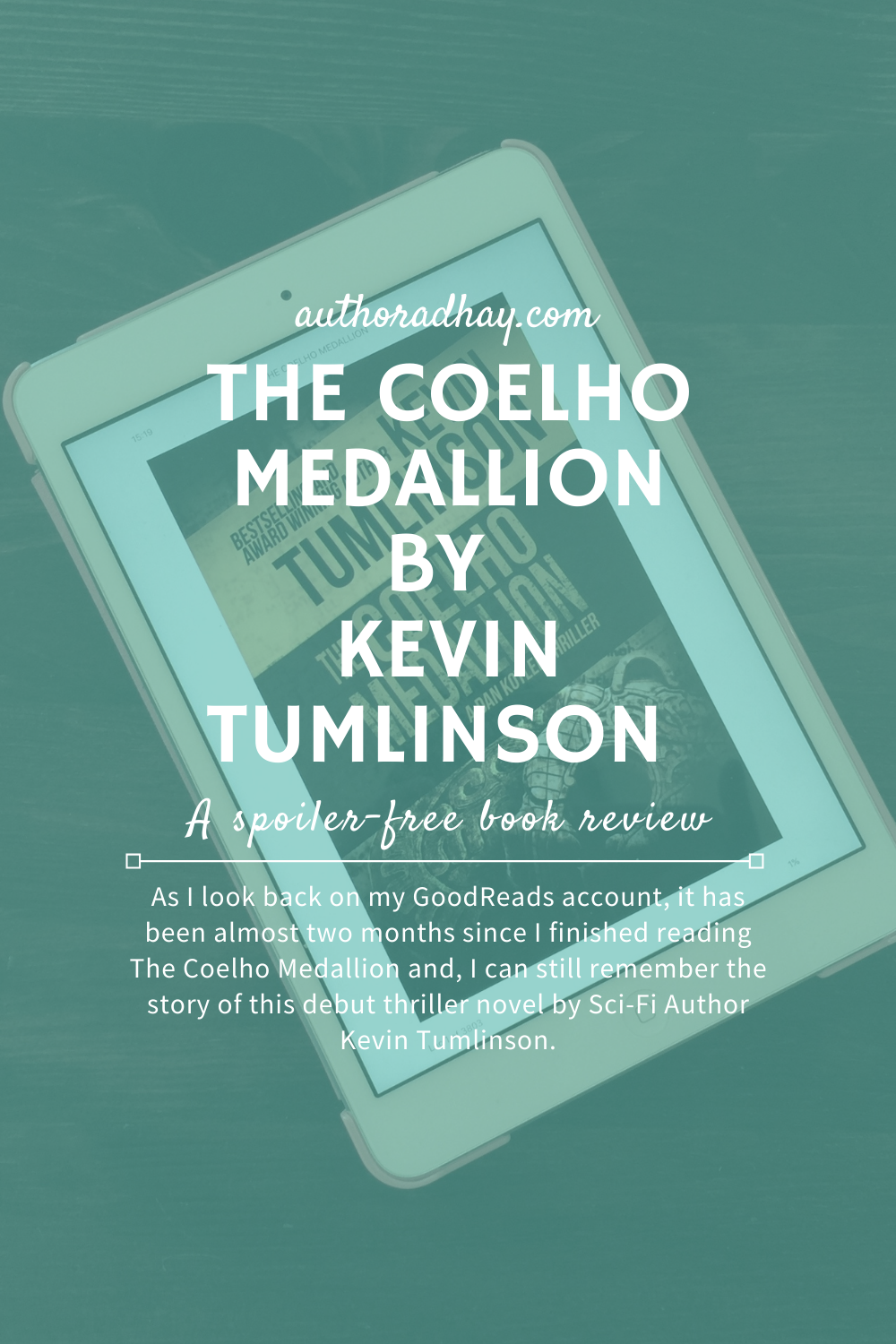 The Kindle and Audiobook

I purchased both the Kindle, the Audiobook, but, it lacked the Kindle WhisperSync for Voice feature. Richard Rieman, the narrator, well read the audiobook. There were no misread words or chapter titles as I have seen in many other audiobooks. This level of attention to detail made it easy to find my place in the Kindle version so that I could read along. What can I say? I love to be read too. The two versions of the book had some minor changes, mainly due to updates over time. But, these changes were minor and did not impact the overall story in any way.

The discovery of a medallion in Colorado, North American has resulted in rewriting of American history and sent waves of shock through the community. What was once considered as mythology by many well-respected researchers and historians is now considered a part of history. A terrorist organisation has stolen this same Medallion and abducted a linguist and researcher in connection with this crime.

Dan Kotler is a researcher, and a jack of all trades who has a particular talent for trouble is looking into this recent change in historical fact when he accidentally stumbles across the terrorists interest in the medallion. As a result of this discovery, he places himself unwillingly on the FBI’s’ radar. The FBI is struggling to make a connection between the events and suspect that Dan Kotler is involved in the events but, lack supporting evidence.

Can Dan Kotler clear his name, find his colleague, and stop the terrorist group from following through with their plans and murdering millions of innocent people?

If you have a love for archaeology, history, mythology, and good versus evil, then I highly recommend this action-packed thriller by Kevin Tumlinson. This book, The Coelho Medallion is the first full-length novel in his thriller series. You can download a copy of The Coelho Medallion on Amazon, iTunes, and other online retailers.

I can’t wait to get started on reading the next book in this series, which is titled, The Atlantis Riddle.

Right now, I’m preparing Book Two in the James Lalonde series, for a final round of revisions. The next step is to send the story off to my editor. I aim to have this eBook published on all major ebook retailers by the end of February 2022. And, I will be making this novel available for free to my James Lalonde Insiders reader club. You can become an insider here.